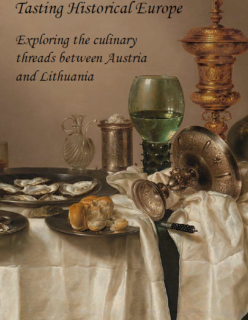 Tasting Historical Europe – Exploring the culinary threads between Austria and Lithuania is an eCookbook dedicated to the historical gastronomic relations between Austria and Lithuania.
Presenting authentic Lithuanian and Austrian recipes, the book attempts to grasp
the gastronomic contexts existing in these countries. Dishes that depict common gastronomic history, as well as Austrian recipes which were adopted in Lithuania and those Lithuanian ones, which travelled to Austria have been selected using sources such as Europeana.
Seven Foodbloggers from Lithuania and Austria contributed to this culinary exploration of their countries, bringing traditional and historic recipes into the present.
The eCookbook is an attempt to look into Europe from a different angle considering it to be a net of gastronomic connections in which every country is connected by invisible threads leading to their kitchens.